Social features like friend invites or referral campaigns are one of the most overlooked game mechanics. Common questions: how much time does it take to implement them, and what results can you expect? In this post, we’ll shed some light on the implementation process, best practices, and metrics to evaluate your results.

An easy and free way to grow your user base is by asking existing users to invite their friends (Friend invites).

The process consists of sending an invitation, receiving one, and installing the app. At the core of the invite flow is a special deep link that holds user information about the referrer. It is smart enough to take the receiver to the proper store depending on their platform, e.g., Google Play on Android or App Store on iOS.

The data and best practices presented in this post are based on analysis of over 88M invites sent using the GetSocial platform. All apps were segmented into three categories based on the depth of the friend invites integration into the game mechanics – Level 1, Level 2, and Level 3.

To compare the results of different levels of invite integration we’ll use:

Level 1 stands for a simple “Invite Friend” or “Share” button on the app’s UI.

Assuming you’re using a third-party service, like GetSocial, for the invitation process (read why it is a bad idea to build it on your own), you only have to decide where to add invite buttons on the UI. SDK integration and testing shouldn’t take more than 1 day for an experienced developer.

Results can be different depending on the quality of the integration with a median of six invites sent per 1000 DAU and average send to install conversion of 1.3%. The median results are not super impressive, but the upper bound is much better. 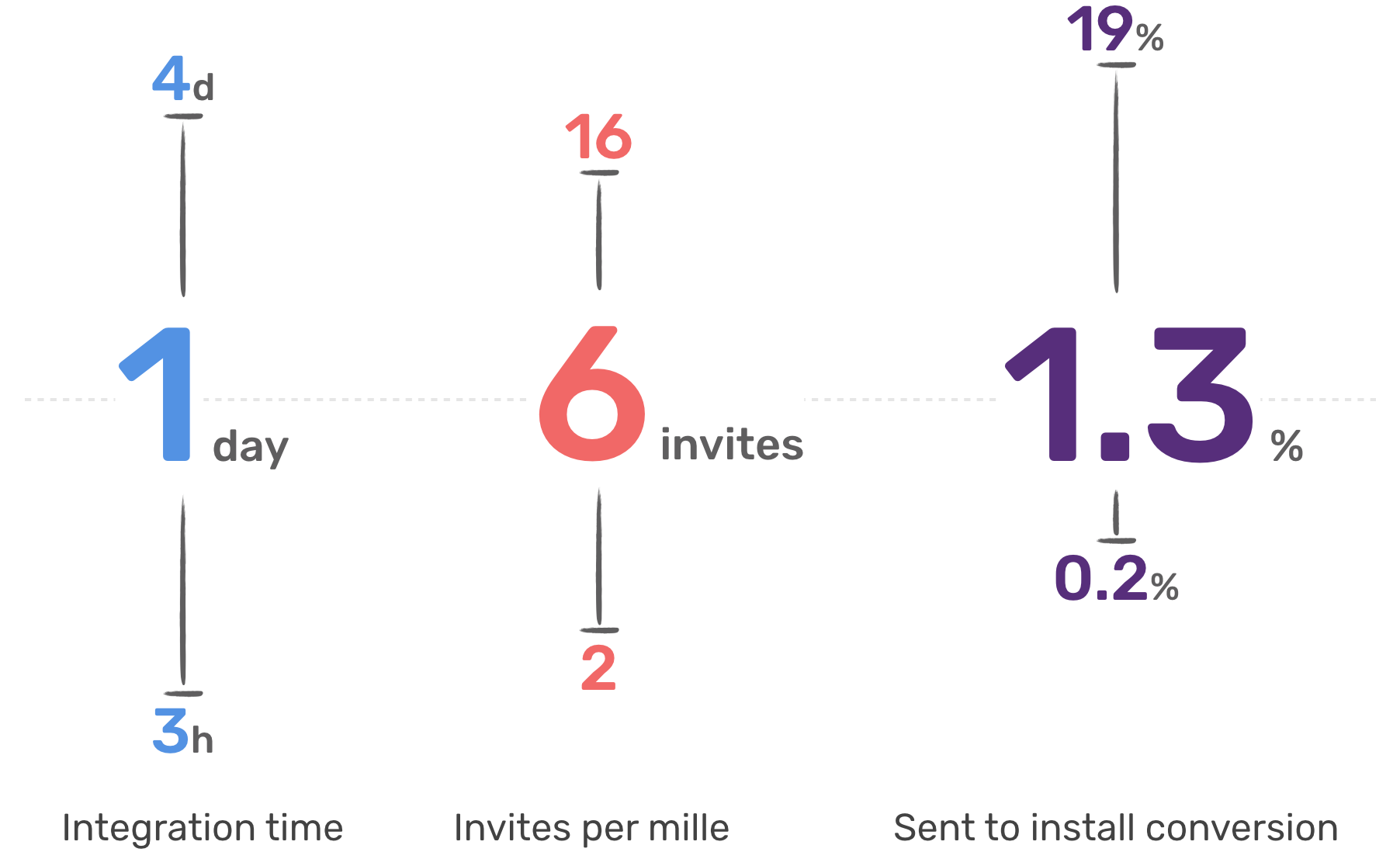 We’ve analyzed the top performers of the Level 1 category and found 3 things that were common amongst them: they provide multiple entry points, multiple sharing channels, and use customized invite messages

Users won’t invite friends or share your app if they can’t find how to do it. Place invite buttons on visible places, like the main screen. Or place them in the context of the game flow. For instance, you can ask users to invite friends to beat their score after finishing a level or share a spectacular game event. 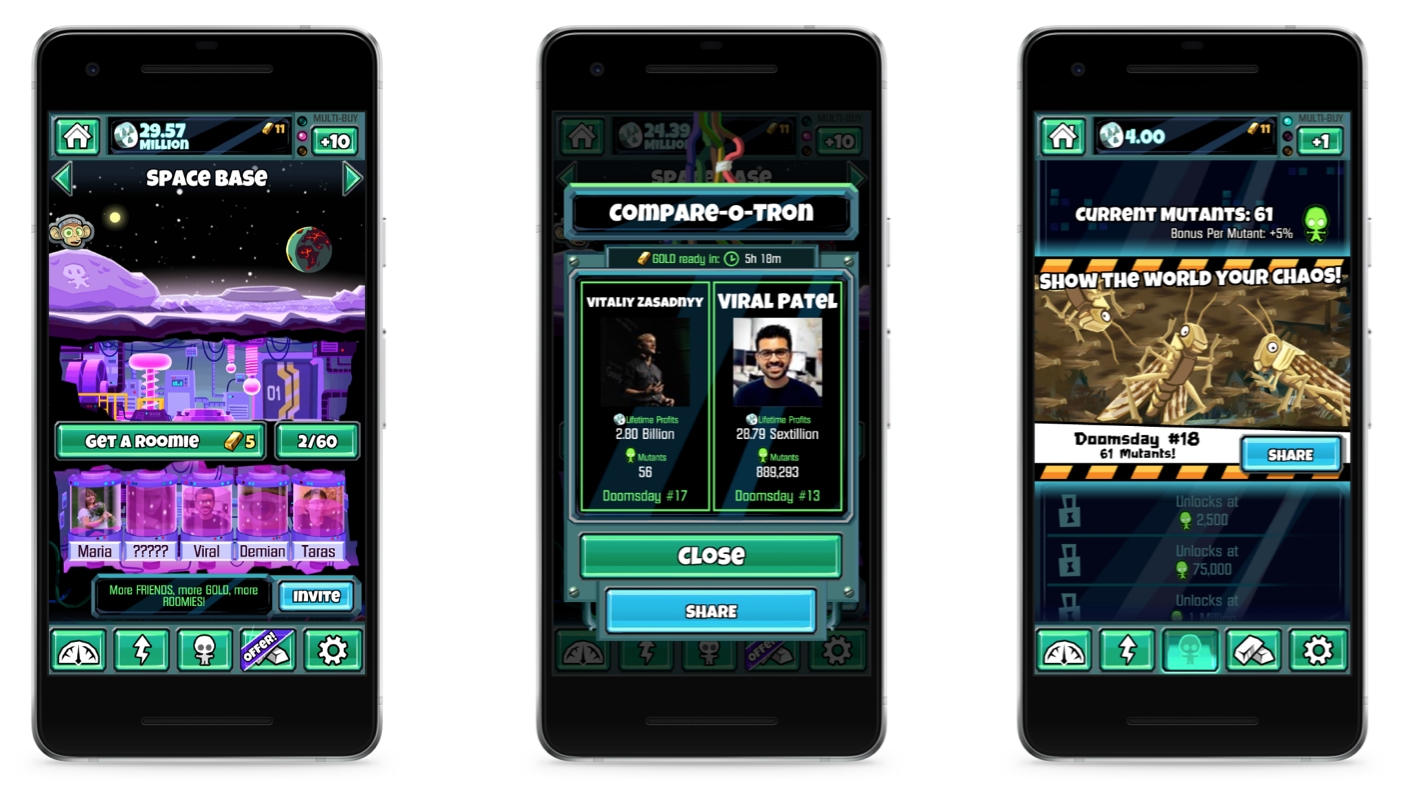 Doomsday Clicker is doing a great job with share buttons. You can invite a friend from the main menu, share a comparison of player profiles, and show off how you destroyed the world this time.

Today’s communication landscape is scattered among hundreds of messengers. I personally have friends on WhatsApp, Facebook Messenger, Line, and Telegram. To make sure that a player can invite any of their friends, we have to provide as many sharing options as possible. Besides that, we have to make sure that users have the same sharing experience everywhere: content is properly displayed and deep linking works as expected. 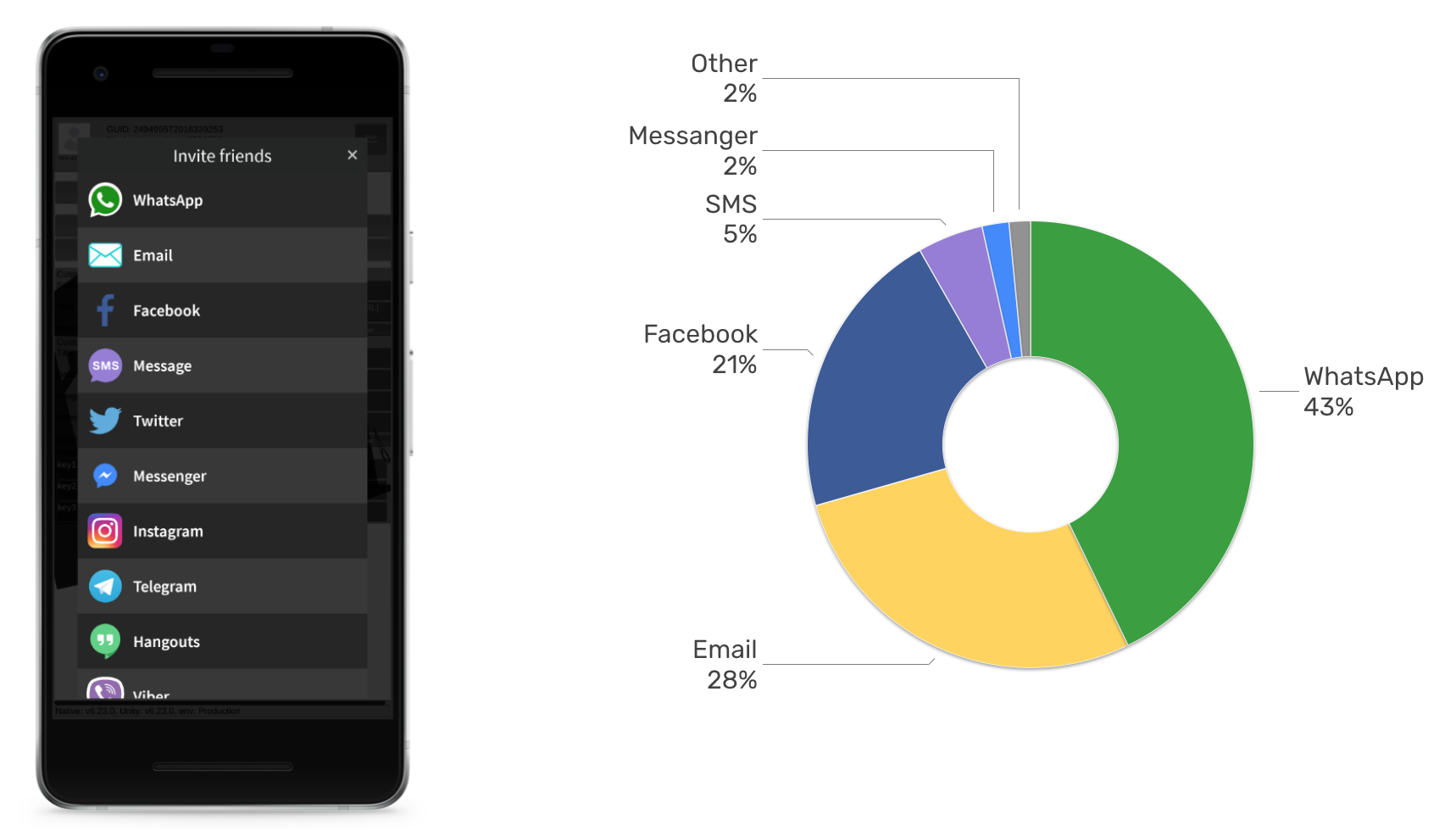 Customizing your invite message is the best way to improve the send to install conversion for invites. You can change the message depending on: 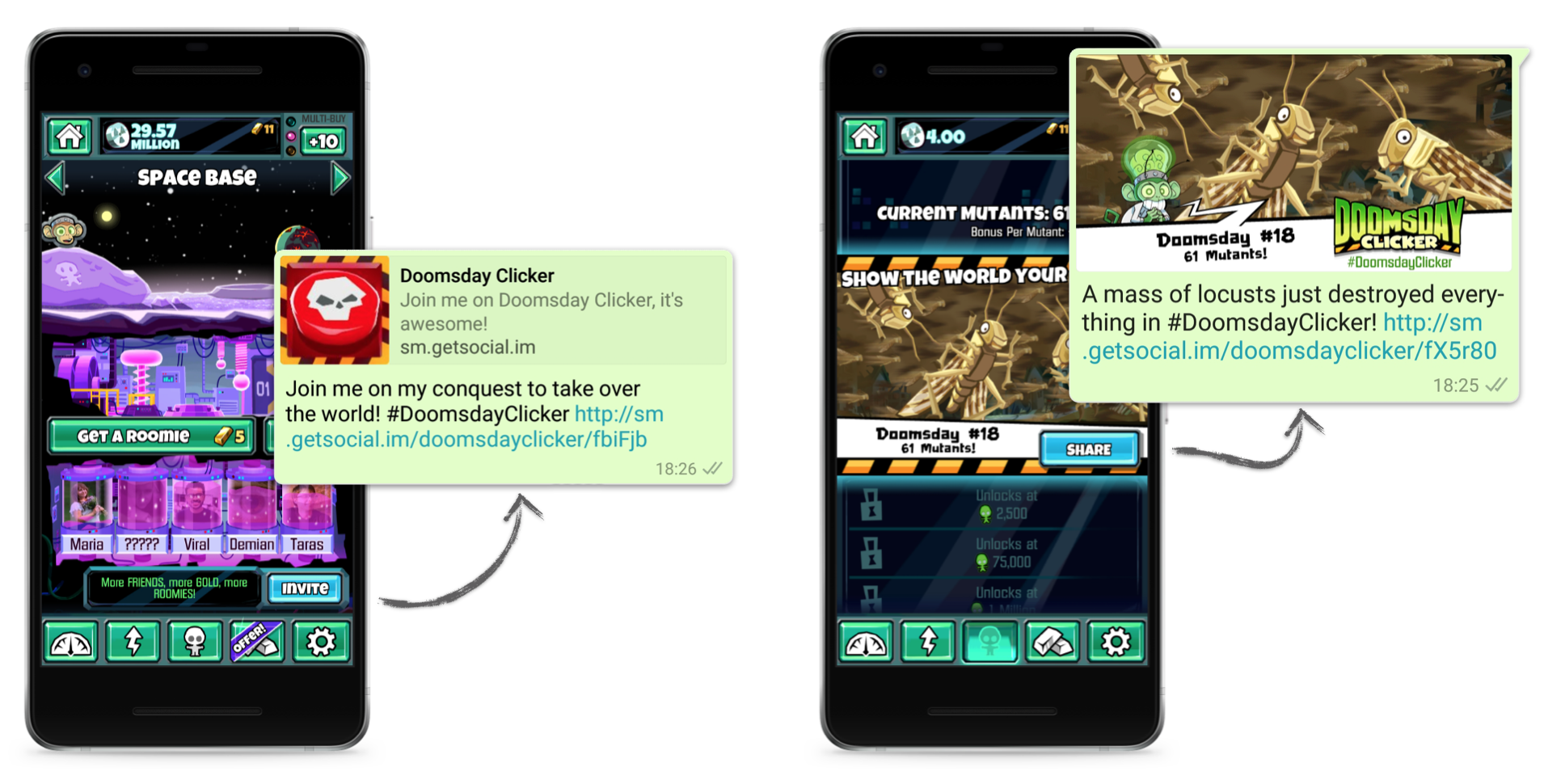 Doomsday Clicker from PikPok improved conversion to 19% after implementing all content optimizations. A conversion that is 14 times higher than average.

Let’s face it, users usually share the app only when they are very delighted. The vast majority of players are indifferent, they need an extra push or an incentive for bothering their friends with an app invitation. Rewarded invites gives them this push.

Rewarded invites require a validation step to prevent fraud. Depending on the security requirements, you can implement validation on the client side or backend.

Implementation can take anywhere from 2 to 7 days depending on how you carry out the invites rewards validation. Comparing to “Level 1. Not rewarded invites”, the number of invites sent are 2.7 times higher on average with 5.3 times higher conversion. 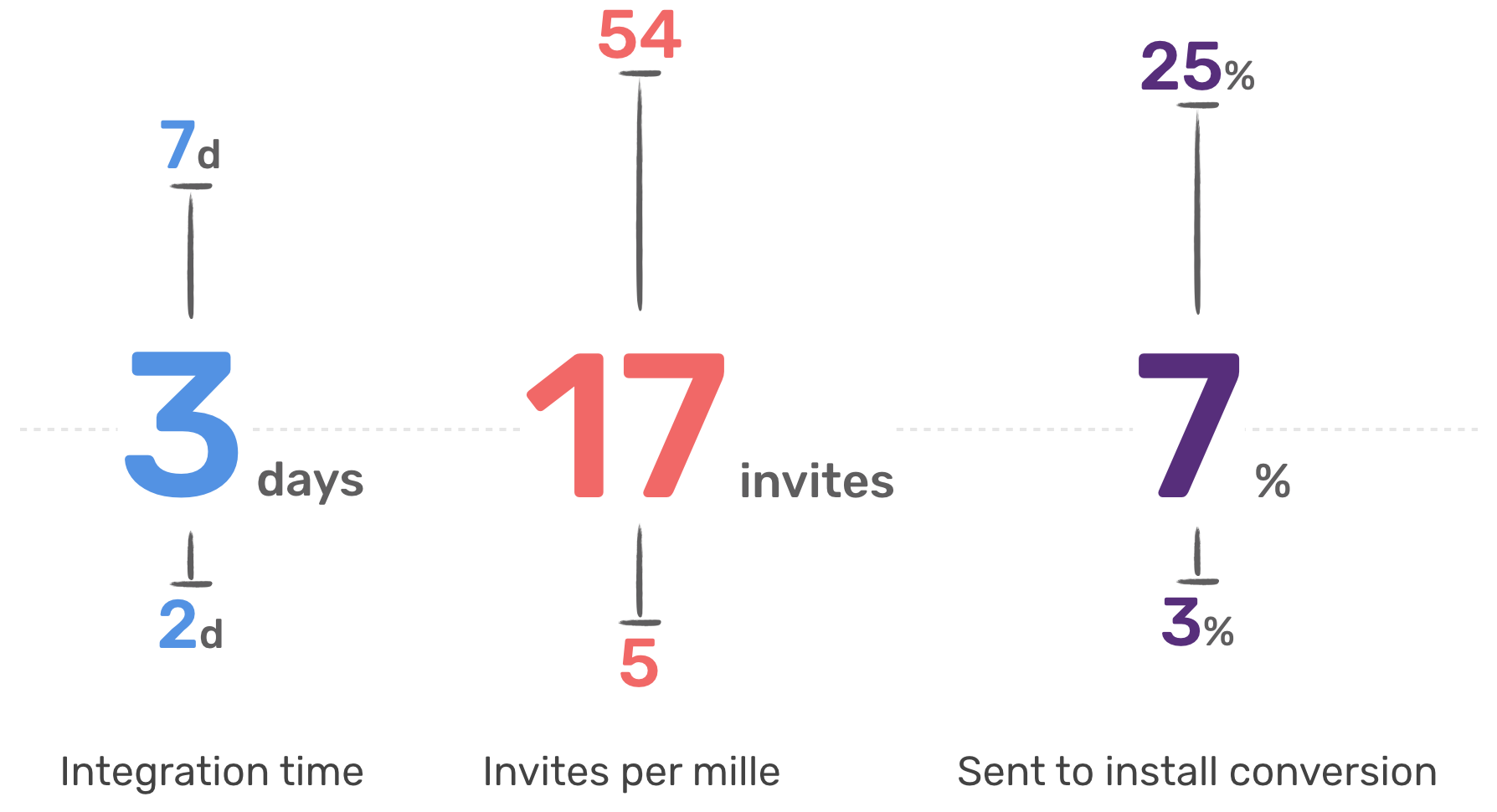 While analyzing games on a case by case basis, we’ve noticed that when the rewarded invites feature is introduced, there is always a spike in the number of invites sent, but later the number drops towards the average. Below we prepared two mechanics that will keep the spikes coming week after week.

Unique in-game content is desirable: epic chests, legendary crystals, space cats, you name it. The goal is to come up with a perk that users can get only by inviting their friends to the game.

The designers of Castle Cats came up with the idea to run recurring quests to invite friends to the game with the unique “Minty Heart” cat as a reward for completing the quest.

Increase rewards with each invited friend

Another mechanic is to increase the reward for each invited friend. You can also reset the invite counter every week to create a spike at the beginning of the next week. 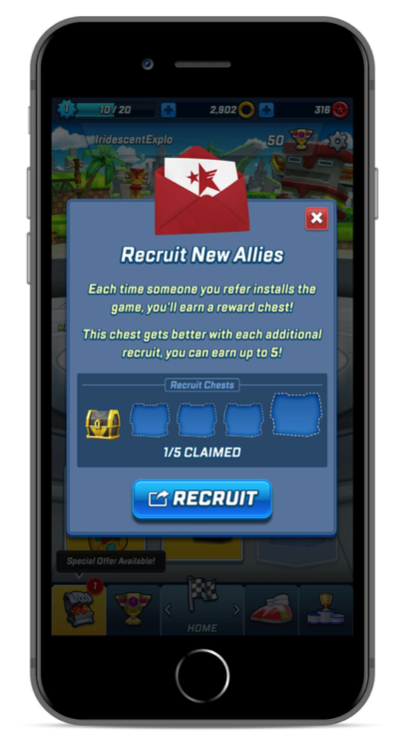 Sonic Forces implemented the first part of this mechanic and for every recruited friend, they rewarded the sender with bigger and bigger chests, finishing with an epic chest for the 5th friend.

Both of the previous examples required changes not only to the UI, but also to game mechanics and economy. The next and deepest level of integration is when the game is designed around friend invites.

For multiplayer games, friend invites is a way to start a session with anyone, even if they don’t have the app installed. When the session is created, all the joining details are attached to the deferred deep link and sent through one of the social channels.

Integrating such friend invites into your core game mechanics can take anywhere from days to weeks. It all depends on how deep you want the integration to be and how many of the required features can be provided by the third party SDK you’re going to use.

Hard work on the game design phase pays off. We saw apps that are sending over 140 invites per 1000 DAU, which is 22 times (!) higher than “Level 1” integration metrics.

To get optimum results you have to tune each step of the invite flow: entry point, invite message, sender’s reward, receiver on-boarding, and receiver’s reward.

It can take time to test all the steps in this flow. When looking at the friend invite funnel as a whole, based on GetSocial data, the biggest improvements come from making a share button visible and fine-tuning the invite message.

To fine-tune variables even faster you can use an A/B testing tool. A few months ago, Unity released native A/B testing tools. On the Unity dashboard, they let you define variables, provide a couple of variations, define which metric will determine the winner and configure the best performing value for all users from the Unity Dashboard.

As with anything, the deeper you go with your integration the better results you will get. By following these best practices, you can push the number of invites sent and conversion to the upper bound of the chart.

Personally, I’d start with a simple “Level 1” integration and add an invite button. If your game is more fun with friends, a tighter “Level 3” integration can yield amazing results. And if you’re building a single-player experience, rewarded invites are the sweet spot between time invested and return.