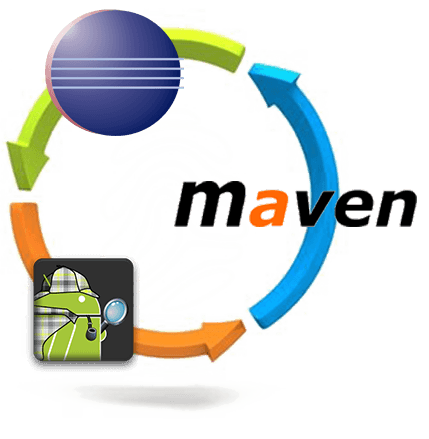 Hello, today I’d like to describe a process of integration commonly used library for emulation action bar in old Android versions - ActionBarSherlock into maven - Eclipse project. In a result we’ll get a project with:

This is my first post, so don’t be too critical :)

If you use Eclipse for development, you’ll also need:

Once generated, the application is ready to be built and tested. Start an Android emulator, or plug an Android dev phone, and execute:

Besides your application, this commands will also install and execute integrations tests application.

Generated project goes with test keystore that could be used for test, but not for deploying to market, run this command to get signed apk:

Now we need to download and add to our project dependencies ActionbarBarSherlock.

Latest version of the library always is available in the project download page. When it’s ready, unzip archive, copy library folder to your project root and rename it to actionbarsherlock:

Also you need to extend HelloAndroidActivity from com.actionbarsherlock.app.SherlockActivity instead of android.app.Activity and change activity theme in AndroidManifest.xml to android:theme="@style/Theme.Sherlock". Checkout git patch file for details. Try to build app. From parent project folder execute:

If you carefully take a look at the last error, you’ll notice that a problem is with generation2 goal. It uses dex tool from Android SDK to generate class files for Dalvik. During the execution, it includes actionbarsherlock and support-v4-r7 dependencies two times (second time like transitive dependency from our application project). Check out it --output parameter values (here is a bit formatted text from maven error):

We can fix this error by adding actionbarsherlock and support-v4-r7 dependencies with scope provided to my-android-project-it/pom.xml:

Let’s fix build path problems that we have. 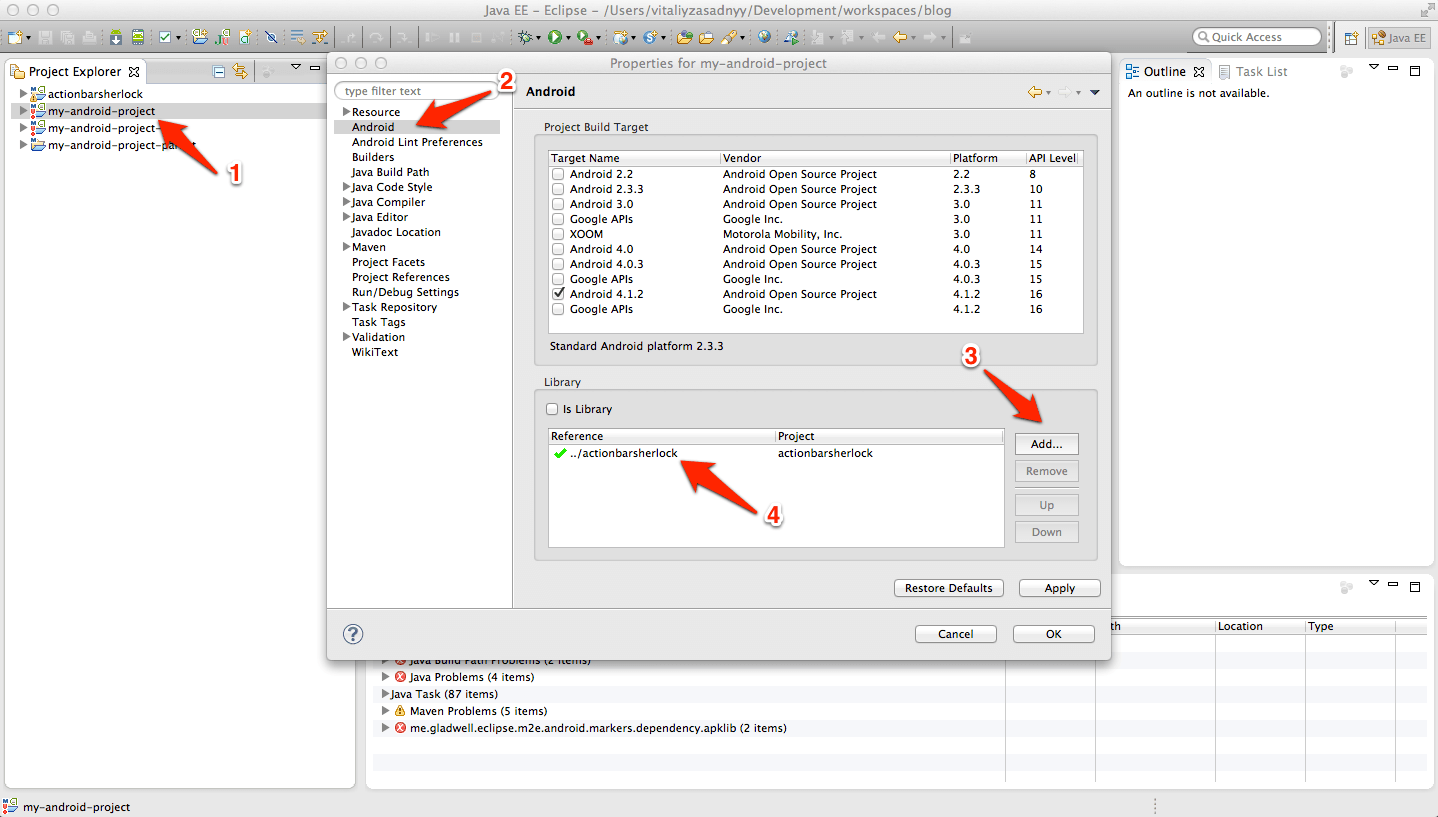 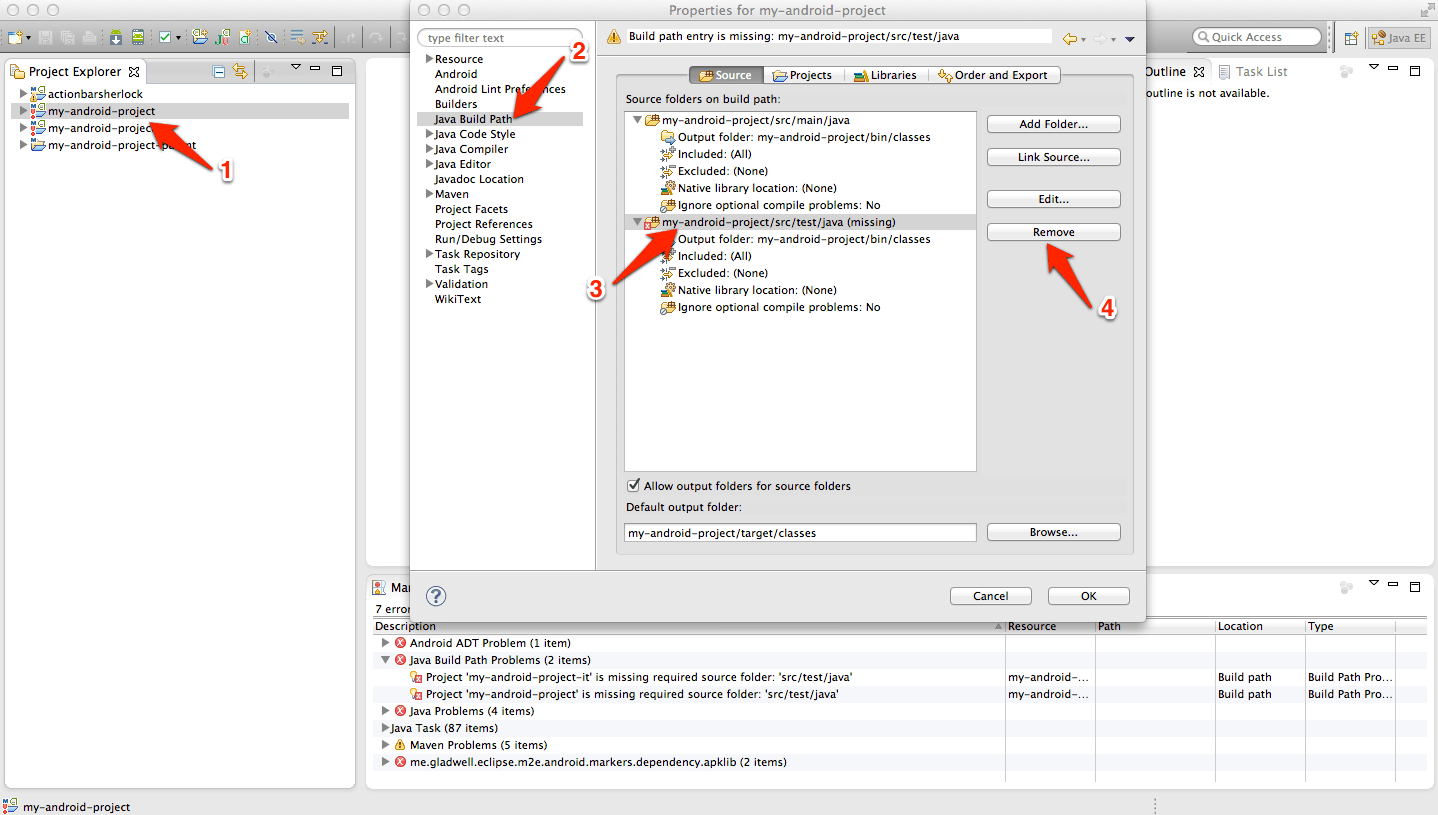 Now all errors from Eclipse markers view should disappear, and we can run our project. Select my-android-project and run it as Android application… but you’ll get:

In console view, you’ll find an error like this one:

Remember our problem with maven configuration? Here we have quite the same issue with double inclusion. In order to fix it remove libs folder with android-support-v4.jar from actionbarsherlock project. 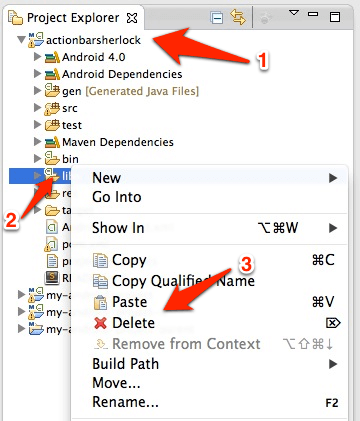 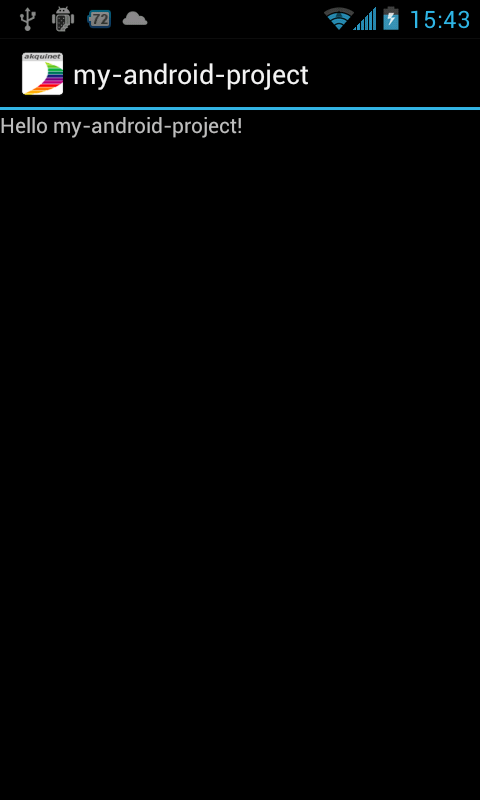 Hope this post was useful, if you have any notes or propositions how it can be improved, please write a comment.